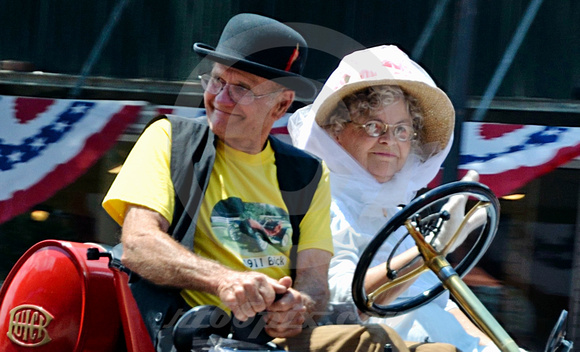 The Lincoln Highway is the "Father Road" to today's US highway system. It was a grass-roots effort funded by contributions from drivers and car interests.

The Lincoln Highway demonstrated that it was possible to drive long distances, perhaps even across the country. It ran between New York and San Francisco from 1913 to 1926.

Outside of cities, it was largely dirt and gravel--but it was marked and improved--and it got better every year. The Lincoln Highway goaded states into building and maintaining roads. Portions later became US 30, 40 and 50.

This photograph is from the 2013 Centennial Parade, where I began this project.

This couple is...uh, sharing driving responsibilities. Generations before texting came along, there was the bulb horn. While you were momentarily distracted, the Designated Driver would keep a steady hand on the wheel.