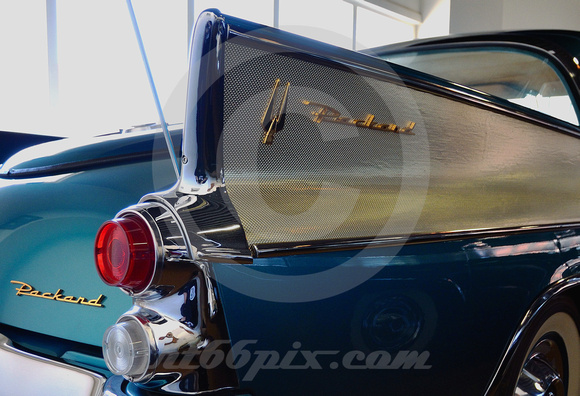 Pretty sharp! This was a 1953 Studebaker body slathered with chrome and fins to make it look like an up-to-date, and up-scale, Packard.

The gold-tone on the side was pretty cool too. Of course, we thought LP records were cool in 1958!

Too bad this model was marred by a bolt-on front (shown elsewhere) that had an unfortunate resemblance to a fish. Only 588 of these Packard Hawks were sold, not nearly enough to recoup tooling costs. It was the last year for the Packard, once a strong challenger to GM'S Cadillac.

This one is on display at Afton Station, a restored D-X (later DX) gas station in Afton OK.
© www.rt66pix.com
Powered by ZENFOLIO User Agreement
Cancel
Continue