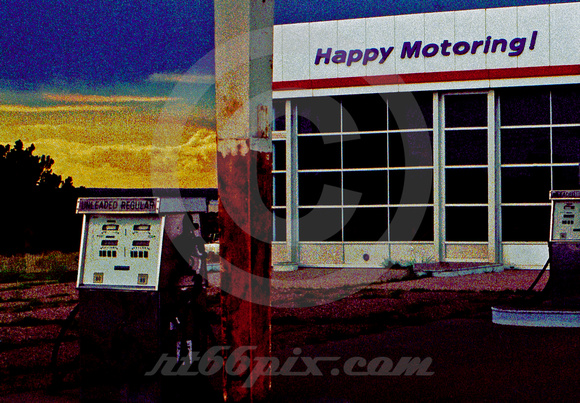 This Gas-N-GONER is among the last of its kind--a traditional gas station designed for full service. It went up in the wrong place at the wrong time.

The station originally had American branding (a predecessor of Amoco) when it was built in the mid-60s. Route 66 traffic was the reason for its existence. (There are only 2750 people in Santa Rosa today, not enough even for a stoplight!)

When I-40 opened through here in 1972, this station wasn't near an interchange. Business dried up and it was forced to close.

The owner says he tried again in the mid-70s, this time with Exxon. Exterior panels and the well-known slogan were added at this time.

Around 1980, new underground tank regulations, and the continued lack of business, forced the station to close again--this time permanently. The owner says he had the old tanks removed and never replaced them.

And so it remains to this day--a traditional gas station with no gas and no tanks--a fenced-off time capsule marking the end of an era. The era called "Happy Motoring!"
© www.rt66pix.com
Powered by ZENFOLIO User Agreement
Cancel
Continue