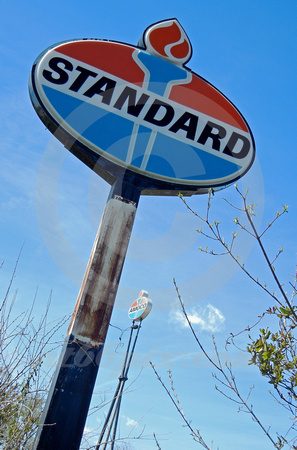 Virtually nothing else is left of this station, or for that matter the Standard and Amoco brands, which were used interchangeably. Both were swallowed by British Petroleum, known as BP, in 1998. A subsequent effort to remake BP into "beyond petroleum" (complete with lower case letters) fell woefully short. Refinery accidents and a huge Gulf of Mexico oil spill left BP standing instead for "Beaches Polluted."

This station was long gone by that time. The Standard sign is the last variant of its kind, with angled lettering. The much-taller Amoco sign in the distance was put up for traffic on I-57. The brands, once dominant in the Midwest, are essentially abandoned now.
© www.rt66pix.com
Powered by ZENFOLIO User Agreement
Cancel
Continue