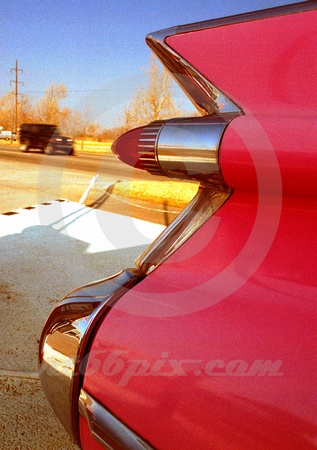 What's going on here? That appears to be the tail fin of a 1959 Cadillac, with some kind of modern generic SUV speeding toward it.

But from this angle the fin looks like a weapon, about to fire on the intruding SUV. The fin is roped off, in a danger zone, with black-and-yellow warning stripes. The chrome nozzles on the fin could hold rockets--or even death-ray blasters!

Maybe the doomed SUV will crash into the giant fin and explode! It's all too horrible to contemplate! Oh, the humanity!

Actually, what's going on here is a bit of fun with "perspective." It wasn't hard to fill more than half the photo with the ridiculous pink fin...and passing traffic on Rt 66 in Oklahoma City created an equally ridiculous scenario to go along with it.

In reality, this Caddy "protects" a legendary Rt 66 fried-chicken restaurant. Intruding SUVs are welcomed, not fired on.

General Motors obviously had fun with the fins on the '59 Caddy. And I figured I could too.

(This image is on display at the Route 66 Interpretive Center, Chandler OK.)
© www.rt66pix.com
Powered by ZENFOLIO User Agreement
Cancel
Continue